I received a email recently about a new book hot off the press that sounds quite intriguing.

Haven't read it myself yet but here's the plug for it.

A Historical Biography of The Real-Life Jesus 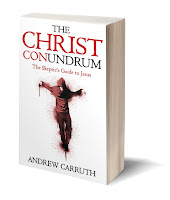 Written with the express aim of disproving the notion that Jesus is God, ‘The Christ Conundrum: The Skeptic’s Guide to Jesus’, re-examines the evidence to reconstruct the life and times of the historical Jesus – and guess what? Jesus was a mere mortal man. In fact, as the Christ Conundrum so aptly demonstrates, Jesus was a monotheistic Jew and as such he would have been abhorred and disgusted that Christians have got his story so wrong.
Author, Andrew Carruth says, “I wrote the Christ Conundrum because I wanted to show evangelical Christians that their claims about Jesus are so absolutely wrong. All you have to do is look at the historical evidence for yourself and it’s clear to see Jesus was a Jew of his own time – he wasn’t god, and he most certainly was not a Christian!”
There are sure to be surprises and intrigue as the ‘Christ Conundrum’ takes you on a fascinating journey into a distant past where people believed that disease was caused by demons, where political activity meant crucifixion, and where people thought the end of the world was just around the corner. Into this explosive mix Jesus emerged.
“It’s interesting that many Jews of the period were expecting an imminent end to the world order,” the author says. “We see this same expectation in the Dead Sea Scrolls, and Jesus’ mission is largely concerned with it. Indeed, in the gospels Jesus explicitly predicts that the end would occur within the lifetime of the disciples who were listening to him. Two thousand years later and the end that Jesus predicted still hasn’t come, clearly he was wrong – Jesus was a false prophet!”
CJ Werleman, author of the now infamous ‘God Hates You, Hate Him Back and Jesus Lied’, ‘He Was Only Human’, praised ‘The Christ Conundrum’ saying, “The book gives a very thorough argument, it’s an intriguing exploration of the life and times of Jesus, and the rapidly expanding readership for atheist books will surely love it.”
~~~~
“The Christ Conundrum: The Skeptic’s Guide to Jesus” (ISBN: 978-0-9564276-5-6) by Andrew Carruth is available from Amazon, on Kindle and in all good bookshops now.

SYNOPSIS
Using the latest scholarly research this book deciphers the mystery behind the mythical figure of Jesus and aims to demonstrate, once-and-for-all, that Jesus was a mere, mortal man. By looking at the ancient sources through the lens of the historian, Andrew Carruth reveals Jesus to be a man of his time; Jesus was a first century Jew, with a very Jewish mission and was hardly unique – in fact there were several other historical miracle workers and ‘Sons of God.’ Entertaining, historically accurate, thought-provoking and controversial the Christ Conundrum is a must read for skeptics and believers alike.
REVIEW COPY
Please request a preview copy of this book here:http://www.dangerouslittlebooks.com/contact
COMPETITION PRIZE
If you’d like to offer your audience free copies of this book as a competition prize along with a review then tell us your plans and we’ll do whatever we can to help:
http://www.dangerouslittlebooks.com/contact
WEBSITE LINKS
Andrew Carruth’s Website: www.god-proof.com
Andrew Carruth’s blog: www.god-proof.com/blog
Andrew Carruth on Twitter: www.twitter.com/AndrewCarruth
Andrew Carruth on Facebook: www.facebook.com/Andrew.Carruth
Publisher’s Website: http://www.dangerouslittlebooks.com
Amazon UK: http://www.amazon.co.uk/dp/0956427650
Amazon USA: http://www.amazon.com/dp/0956427650

ARTICLES/INTERVIEWS
Andrew Carruth is happy to provide free content in return for a ‘plug’ of his book. He is open for interviews, speaking engagements, freelance commissions, or other ideas. Please contact:http://www.dangerouslittlebooks.com/contact or email / call Julie Reeves on jules@god-proof.org, +44-75145-44189
THE AUTHOR
Andrew Carruth is a former journalist and narcotics control officer who has lived in the Maldives and Indonesia, but who has returned to his native UK to focus on his writing. It was during his travels that Andrew came to realize that people are all essentially the same and that it is foolish to divide them according to which superstitious fable they happen to believe in.