Tim Minchin On The Pope, Mo Boobs and Jesus and Mo ....

While the video and the cartoons are quite hilarious, all have the potential of being extremely offensive to some.

If you are:
1. easily offended
2. object to swearing
3. are religious (particularly Catholic or Muslim)
4. are a religious accommodationist

And/Or are humor challenged...

Do Not Watch This Video Or View The Rest Of This Post.

Note that the entire point of Free Speech rights is the right to be critical, no matter how offensive others may perceive that criticism.

Since this is a right that I take seriously, and choose to exercise freely, anyone who has objections to that should not read this post or this blog.

Since I don't want to single out the Catholics ....


In honor of Everybody Draw Mohammed Day (May 20) the following cartoon posted originally on and belonging to Blazing Cat Fur, and in honor of BoobQuake follows. 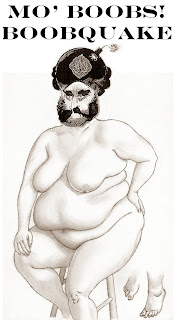 And then there's the famous (and one of my favorite) cartoon series: 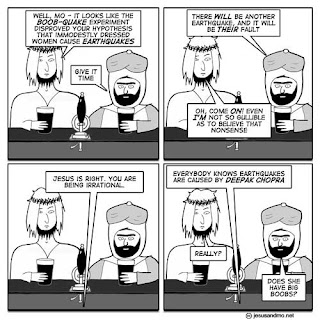 Email ThisBlogThis!Share to TwitterShare to FacebookShare to Pinterest
Labels: Humor

The Freethinking Woman : A Historical Perspective. Pt. 1 of 3

"I myself have never been able to find out precisely what feminism is: I only know that people call me a feminist whenever I express sentiments that differentiate me from a doormat, or a prostitute." --Rebecca West

My definition is quite simple.

Feminism is the movement for equal rights for women whatever that might entail during any given period in history.

Given my definition I don't accept the concept of "protofeminism" nor do I believe that there were only three "waves" of feminism.

That said, for now and in the interests of clarity, I will make my comments within the context of accepted historical standards.

Historically speaking there have been three "waves" of feminism defined.

The first wave began in the 18th century along with the development of the FreeThought movement and Rationalism and was supported by many FreeThinkers from it's inception.

It's neither an accident nor a coincidence that the suffragette leaders were FreeThinkers for the most part.

That's not to say that Christian women didn't play a role in fighting for the right to vote. They did. It was, in fact, the one unifying issue between Christian feminists and FreeThinking feminists.

While the stated focus of this First Wave was womens suffrage, the right to vote, it's real focus was much more than that.

It was about the right of women to recognized as persons under the law.

After all, that's precisely why women didn't have suffrage. We were legally considered chattel, the property of the men who were in charge of us whether they were our fathers, husbands, uncles, brothers, caretakers, etc.

While the women of the day who posed arguments to support their right to equality did so within the context of the times and in relation to the existing social theories which kept them enslaved, the real issue was glaringly obvious and while unstated, was reflected clearly in Marion Kirkland Reid's, A Plea For Women (1843), where she elucidated three issues which stood in the way of women's rights. These three issues formed the foundation for both the First and Second Wave Feminist movements.

They were:
1. Lack of civil rights
2. Unjust laws against women
3. Inability to obtain an education

If women were considered human beings, people under the law, the above would have resulted in violations of the existing Constitutions in various western countries.

In addition, it was implicit in the existing social theories of the day which Reid also addressed:

Reid spoke to these in the context of "women's appropriate role in society".

So Reid's major contribution was to objectify through these issues the real problem which was that women were not considered to be persons under the law, by the society of the day.

Reid's document, combined with the shunning of women from around the world, who attended the first World Anti-Slavery Convention in 1840 led to the Seneca Falls Convention in the US, on women's rights. The Declaration of Rights and Sentiments was authored here by Elizabeth Cady Stanton, and became the foundation for American feminism.

Excerpt:
"We hold these truths to be self-evident: that all men and women are created equal; that they are endowed by their Creator with certain inalienable rights; that among these are life, liberty, and the pursuit of happiness; that to secure these rights governments are instituted, deriving their just powers from the consent of the governed. Whenever any form of government becomes destructive of these ends, it is the right of those who suffer from it to refuse allegiance to it, and to insist upon the institution of a new government, laying its foundation on such principles, and organizing its powers in such form, as to them shall seem most likely to effect their safety and happiness."

"Closing Remarks
Now, in view of this entire disfranchisement of one-half the people of this country, their social and religious degradation—in view of the unjust laws above mentioned, and because women do feel themselves aggrieved, oppressed, and fraudulently deprived of their most sacred rights, we insist that they have immediate admission to all the rights and privileges which belong to them as citizens of these United States."

Once suffrage, the right to vote, was won, a major hurdle was overcome. This right, through the XIXth Amendment of the US Constitution legally established that women were persons under the law.

[The right of citizens to vote shall not be denied because of sex.]

[Congress given power to enforce this article.]

Congress shall have power to enforce this article by appropriate legislation.

This allowed women to move things to the next level, to establish legal and social equality in other areas.

Women now began the process of establishing an identity through media and culture,  legal rights, employment inclusion and equity, reproductive rights, exploration of gender issues and female sexuality, fighting for social reform on many fronts including Family and Property Law.

None of these issues was won easily and at times resulted in the imprisonment of advocates.

In addition, many rights were removed after WWII since women were no longer needed in the work force.

This environment led to the Second Wave of Feminism.

Simone de Beauvoir, mother of modern feminism, existentialist philosopher, feminist, polyamorist, bisexual, lover of and inspiration to Jean Paul Sartre wrote the ground-breaking book, The Second Sex in 1949 which laid the foundation for this Second Wave of Feminism.

She established the concept that women's goal wasn't to be like men but to be equal to men, that equality was established by the freedom to choose, and was responsible for coining the term, Women's Liberation.

In Honor Of BoobQuake -Updated 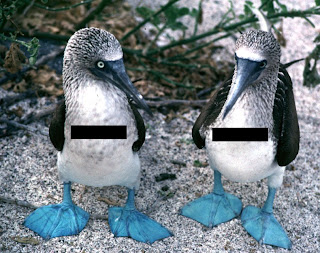 Mo' Boobs for BoobQuake - Do not click if you are easily offended!

BoobQuake Promises a Shake-Up on April 26!

The BoobQuake event which started as a joke by skeptic atheist feminist blogger, Blah Hag, has taken hold with nearly 130,000 Facebook participants and thousands of tweets on Twitter, as of this moment. (Yes Skeptic Feminists *do* have a sense of humor!).

"In the name of science, I offer my boobs" says she :-) who is also a Biology/Evolution major.

"Many women who do not dress modestly ... lead young men astray, corrupt their chastity and spread adultery in society, which (consequently) increases earthquakes," Hojatoleslam Kazem Sedighi was quoted as saying by Iranian media. Sedighi is Tehran's acting Friday prayer leader."

It works for me either way.

The media has become quite entranced with the event being reported everywhere from the US, Canada, Australia, India, et al.

Vancouver has decided to have a rally on April 26 called BoobQuake in front of the Art Gallery. Immodestly (but legally) dressed women will parade their immodesty from 4PM to 8PM.

The organizer of the Vancouver rally will have a computer with a geiger counter to test for any shaking in the area.

Blag Hag was quoted by CNN as saying:

“It’s not supposed to be serious activism that is going to revolutionize women’s rights, but just a bit of fun juvenile humor,” she wrote. “I’m a firm believer that when someone says something so stupid and hateful, serious discourse isn't going to accomplish anything - sometimes light-hearted mockery is worthwhile.”

And I couldn't agree more.

Email ThisBlogThis!Share to TwitterShare to FacebookShare to Pinterest
Labels: What's Going On, Women

Indian Freethought On The Move

The Indian Freethought Community is getting busy organizing and building the Freethought movement in India.

At the forefront of this movement is a group called Nirmukta, many of whom are members on various atheist sites like Atheist Nexus, alt.atheism, Atheism versus Christianity (theism), etc.

One member has actively organized campaigns to go into the countryside and teach the villagers science in order to educate them on superstitious beliefs and the damage they do.

I don't think there's any requirement that you be Indian to join the Forums.

They are located here:

One of the Nirmukta articles was picked up and Tweeted by Richard Dawkins recently.
http://twitter.com/RIchardDawkins

India is a land entrenched in superstitious belief but it is also a land which gave rise to the earliest known atheistic, materialist, naturalist and secular belief system known to humanity, Carvaka.

Best wishes to the Indian Atheists and may they enjoy the same successes that have occurred with other atheistic groups around the world in recent years.

--
"Love is friendship on fire" --Anonymous

"Faith may not move mountains, but you should see what it does to skyscrapers" --Panama Floyd, aa#2015
at 8:24 AM No comments: